Munich, Germany May 23, 2019
REC Group, the leading European brand for solar photovoltaic panels, has secured the first orders for its new game-changing Alpha Series of high-performance solar panels. The Alpha Series delivers industry-beating power of up to 380 watt-peak (Wp), making this the world’s most powerful 60-cell solar panel. The first orders – with a total volume of 4.3 MW – come from all over the world, from Australia, over Europe up to Hawaii in the U.S. 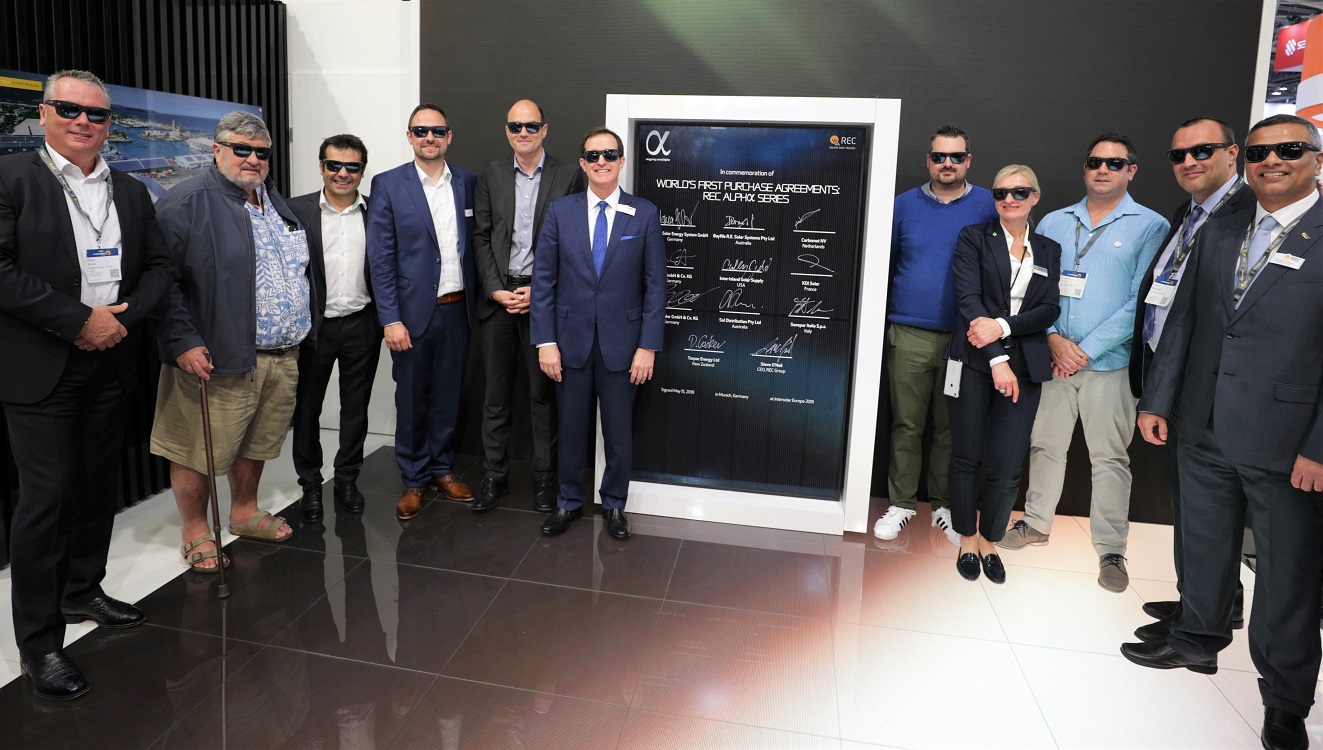 Launched officially by REC Group CEO Steve O’Neil and CTO Shankar G. Sridhara at Intersolar Europe on May 15, the new panel captured a sizeable order volume of 4.3 MW within its first hours. Steve O’Neil is proud of this early success: “With the Alpha, REC set out to build a solar panel that would create a triple win opportunity: for REC, our partners and solar professionals as well as for households and businesses who want to create a legacy of sustainable energy for the next generation. With orders so soon after the launch, the new panel is on track to meet these objectives.”

REC Alpha Series in profile
The Alpha delivers the world’s best power density on a 60-cell module: over 20% more power from the same area and the same number of panels compared to a mainstream 300 Wp panel. This is a key consideration when space is tight – like on any rooftop. Emerging from REC’s leadership in half-cut cell technology, the Alpha is built around 120 half-cut heterojunction cells (HJT) and advanced connection technology, designed by engineering experts from Germany and Singapore. With HJT, REC combines the benefits of crystalline silicon solar cells with those of thin film technologies for much higher efficiency and energy yield, even at higher temperatures.

First customers around the globe
The first takers of the Alpha solar panels did not need long to decide. They all put their signature to a special edition of the REC Alpha panel at Intersolar Europe – marking the kick-off to what promises to be a successful career for the latest ground-breaking innovation from REC Group.

The Alpha Series is scheduled to go into production in Q4 2019 at REC Group’s vertically integrated facility in Singapore and REC’s new ‘Industry 4.0’ cell fab. For more information about the new REC Alpha Series, visit www.recgroup.com/alpha.

About REC Group:
Founded in Norway in 1996, REC Group is a leading vertically integrated solar energy company. Through integrated manufacturing from silicon to wafers, cells, high-quality panels and extending to solar solutions, REC Group provides the world with a reliable source of clean energy. REC’s renowned product quality is supported by the lowest warranty claims rate in the industry. REC Group is a Bluestar Elkem company with headquarters in Norway and operational headquarters in Singapore. REC Group employs 2,000 people worldwide, producing 1.5 GW of solar panels annually.